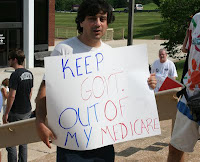 It seems that Americans aren’t so keen on being cock blocked at every turn by the extreme right wing fringe of the Republican party, who would’ve guessed! At this point the only thing trending lower than the Tea Party is Congress, which is like comparing toilets, no matter how you look at it, it’s going to be full of shit.

Over that last few years the county has been moving to the right, favoring smaller government and less spending. The exact same thing the Tea Party stands for, so why are they so unfavorable? Maybe it’s because they absolutely refuse to compromise in any way, shape or form. For example, why is closing Planned Parenthood a make or break deal during a debt debate that affects the entire country financially? How, exactly, does that create jobs? For the Tea Party practicality takes a back seat to partisan ideology.

Now, before I rattle off who has a higher approval rating than the Tea Party (way to go Muslims!) remember that this is what happens when the extreme fringe element of a party takes over. My Twitter name is @ragingteabagger and it only exists because of the Tea Party and when you lose relevancy, so do I. So take this post with a grain of salt and keep on doing what you’re doing to keep this character alive, it’s a real slice playing one of you people.

Just a few things that have a higher approval rating than the Tea Party: