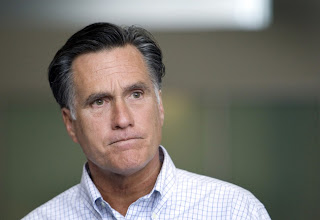 After all the hoopla about Romney being the front runner, the whole thing with T-Paw caving to him like Palin did to a full term, is now losing to Perry by double digits according to the latest Gallup Poll. With Perry hammering him on his RomneyCare package it doesn’t appear he’s going to let up either, has Perry made Romney his bitch?

Only two things come from Texas and it’s obvious that Perry’s no steer, as we’ve clearly seen in a previous post the man can give Andy Dick a lesson in knob gobbling. So what’s Romney to do now? Well, he could continue running around calling corporations people, lord knows he’s treated both with the same contempt so maybe he’s on to something. Maybe he could pull a Pawlenty start sucking up to Perry and jockey for a VP slot, a Christian and a Mormon, shit with 20 kids per kid per grand-kid per family they can win the primary on that alone.