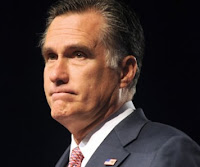 Wrapping up his overseas visit, the Romney campaign goes out with a bang. Butchering the first two legs of his tour by questioning England’s ability to handle the Olympics and insulting the Palestinian people while using inaccurate numbers to describe Israel’s GDP, why not go three for three.

Romney had just laid a wreath at the Tomb of the Unknown Soldier in Warsaw’s Pilsudski Square, personally thanking and shaking hands with about 50 uniformed Polish soldiers who watched the silent ceremony. Then, in a gesture of gratitude, Romney pressed his hand to his heart and bowed his head.

As he walked back to his vehicle, he ignored reporters’ shouted questions. When a journalist noted that Romney has taken almost no questions from his traveling press corps throughout the foreign trip, Romney spokesman Rick Gorka retorted, “Kiss my ass.” Washington Post 7/31/2010

Gorka said it was a holy place and demanded reporters show some respect, he then went on to tell another reporter to “shove it.” He later called the reporters to apologize. One campaign strategist then called the trip “a success.”

If a tornado destroys your neighborhood, then yes, the tornado was a success.