How Mitt Romney Can Stop Attacks On Tax Returns

How Mitt Romney Can Stop Attacks On Tax Returns 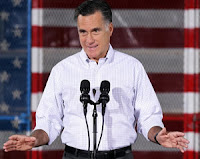 As Mitt Romney hits back on attacks by Democrats over not releasing his tax returns, he has found himself off message and on his heels, specifically sharply worded accusations from Senate Majority Leader Harry Reid.

Many, including some Democrats, found this accusation to be both unfounded and unnecessary. However, if the goal was to prompt a response from the Romney camp, then it was successful as they shot right back.

“Harry Reid really has to put up or shut up, all right?” Romney said when reporters asked about Reid’s allegation. “So Harry, who are your sources? Let’s have Harry explain who that is. And by the way, Harry, I understand what you’re trying to do. You’re trying to deflect the fact the jobs numbers are bad, that Americans are out of work, and you’re trying to throw everything up on a screen that will grab attention away from the fact the policies of the White House haven’t worked to put Americans to work.”

“Let me also say categorically, I have paid taxes every year, and a lot of taxes. A lot of taxes,” he said. “So Harry is simply wrong, and that’s why I’m so anxious for him to give us the names of the people who have put this forward. I wouldn’t be at all surprised to hear the names are people from the White House or the Obama campaign, or who knows where they’re coming from.”
Los Angeles Times 8/4/2012

One way the Mr. Romney can clear this up is by releasing several more years of tax returns, which as long as he refuses to do, will continue to be red meat for Democrats.